Excited to share HISTORY, NOT NOSTALGIA: CROSSROADS 2021, for JAMES BALDWIN, an essay, spoken word video, and Baldwin-inspired playlist––all created at the invitation of the Brooklyn-based music/arts venue, National Sawdust, for their website. The five-minute video was shot on location at City Hall Park, NYC. The current Public Art Fund installation of sculptures by Melvin Edwards seemed the ideal visual counterpoint to contemplate the impact of the great James Baldwin’s words on this unique moment in American and world history.
Click for National Sawdust page
Click for Video only

This project was created in conjunction with National Sawdust’s salon project, Fire This Time, hosted by poet Lynne Procope. You can also checkout these amazing salon sessions on their website.

––posted on the eve of sentencing of his murderer,

The reading was a book launch for their anthology, “We’re Not Neutral: Reset Series 2020 Collected Short Plays.” Shout out to Antonyio Artis and Tanya E. Taylor, performer and director of the first version of this piece. That clip is also on my YouTube channel.
Book link: https://www.amazon.com/Were-Not-Neutral…/dp/B092P9NWWG

Honored to be awarded a 2020 NYSCA/NYFA Artist Fellowship in Nonfiction Literature. During these most challenging of times, I am incredibly moved and inspired by this affirmation of my memoir-in-progress––somedays titled Our Laundry, Our Town and other days, The Last Emperor of Flushing’s Final Communique.

I am forever grateful to the New York Foundation for the Arts for their long-term support. This is my third Artist Fellowship but first one in 24 years! (Previously awarded a 1996 Playwriting/Screenwriting Fellowship and a ’91 Performance Art/Emergent Forms Fellowship.) Thank you, NYFA, for recognizing myself and other “mature artists” in this era of rampant ageism as well as lifting up so many artists­­––decade after decade in your ongoing essential work. The Arts matter in every era and at every stage and age of our individual and collective journeys. Keep on doing! 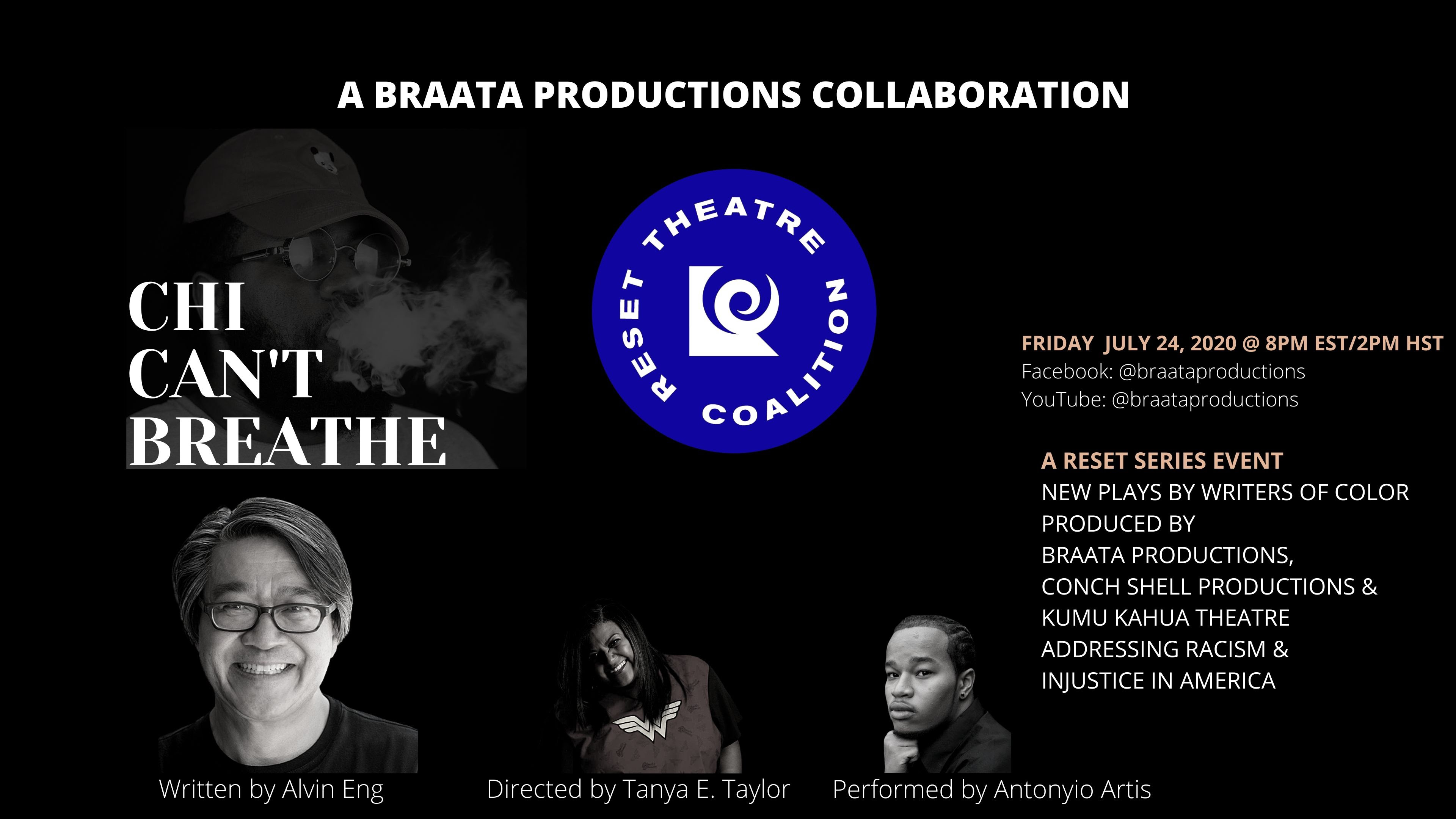 Also excited to share that CHI CAN’T BREATHE is now available for viewing on my YouTube channel.
CHI CAN’T BREATHE was written at the invitation of the RESET! Theatre Coalition Series for BIPOC playwrights to respond to the killing of George Floyd and related current events during the Summer of 2020. The monologue was powerfully performed by Antonyio Artis and magically directed by Tanya E. Taylor. The RESET! Theatre Coalition was formed by Braata Productions, Conch Shell Productions and Kumu Kahua Theatre. The Series consisted of live performances of the newly invited written works streamed on the three theatre’s YouTube and Facebook Live pages during the Summer of 2020 Reckoning. CHI CAN’T BREATHE had its premiere performance in the RESET series on July 24, 2020. The work runs approximately 7 minutes.
Finally, as it does not look as if we will be sharing shows and stories in person anytime soon, hope you will consider subscribing to this YouTube channel. channel where Wendy and I will be sharing new work. Stay safe and resilient…VOTE!!!

Hope everyone is staying safe and resilient during this time like no other. Just wanted to share some news regarding my new acoustic punk raconteur solo work-in-progress, HERE COMES JOHNNY YEN AGAIN (or How I Kicked Punk). Of course, the re-scheduled Dixon Place Workshop Residency performance has been cancelled.

But this Friday, September 25, from 8-9pm (EST), I am excited to be performing part of the show as a Special Guest in a City Lore Virtual Salon hosted by Annie Lanzillotto. The salon will include performances from Annie and myself, followed by a discussion on Asian American/Immigrant disenfranchisement––from the Chinese Exclusion Act to the spike of anti-Asian violence and immoral ICE raids during the Pandemic.
Joining the conversation will be actor/activist Ariel Estrada from Racism is a Virus and City Lore board member and Think! Chinatown president, Amy Chin.

Then on October 6, I am honored to discuss HERE COMES JOHNNY YEN AGAIN as a Guest Speaker in my colleague, Dr. Linta Varghese’s, Asian American Literature course in BMCC/CUNY’s Center for Ethnic Studies.

If you cannot join us on Friday, the piece will eventually be archived on my YouTube channel. As it looks like we will be sharing work on the streaming screen and not the stage for the foreseeable future, hope you will also consider subscribing to my YouTube channel.

New Video:
The Last Emperor of Flushing at 70 Mulberry St.

Now you can tear a building down, but you can’t erase a memory…”
From “Open Letter (To a Landlord)” by Living Colour & Tracie Morris

Last October, Wendy and I had the honor of presenting a 10-minute excerpt from my memoir monologue, “The Last Emperor of Flushing,” at Chen Dance Center in the historic 70 Mulberry St., building in Chinatown, NYC. This work humorously recalls Alvin’s odd odyssey of growing up in one of Flushing’s few Chinese families in the 1970s––that ran a Hand Laundry on Union St, no less!––to later becoming one of its few citizens who could not speak fluent Chinese. Flushing had become NYC’s second Chinatown! (Eng is currently expanding this work into a prose memoir.) Please click here to see The Last Emperor of Flushing at 70 Mulberry St.

As many of you know, 70 Mulberry St., a longtime artistic and spiritual hub of the Asian American/NYC Arts world and Chinatown, suffered a devastating fire on Lunar New Year’s Eve, 2020. The building is being razed by the city right now. Please consider supporting efforts to demand that NYC officials recognize that Chen Dance Center and the Arts must have a home in the “new 70 Mulberry St.” For more information, email Dian Dong at diandong@chendancecenter.org

New Video…
The performance was part of Chinatown Arts Week presented by Think!Chinatown. In many ways, this elegy to a pivotal turning point in NYC/Asian American history was a perfect fit on that storied Chen Dance Center stage…please join us in the fight to restore this home to the Arts in Chinatown, so we can once again create and celebrate our history and legacy at 70 Mulberry Street.

…on Video from Dixon Place, NYC

Hope this finds everyone staying safe and engaged in all that moves you.

Tonight (April 18) would have been the third and final performance. Of course, this has been cancelled (but rescheduled for Saturday, October 24, 2020!). To have the show go on tonight, and keep running in a different way, we are excited to share on YouTube, a two-camera video from the March 7th performance at Dixon Place. The video will be available indefinitely.

This 25-minute video is from the second of three workshop performances. We were joined by Special Guests, Rick Ebihara and Perry Yung from the Slant Performance Group, for a “Tai Chi Music-Meditation Tribute to Lou Reed”…with Wendy also appearing!

The video was directed, filmed and edited by Wrolf Courtney with second camera by John Quincy Lee.

As this is a work-in-progress, we welcome any feedback, comments or questions.

Finally, we greatly appreciate everyone who worked on this video and performance––as well as everyone who joined us onstage and off in February and March at Dixon Place. Hope to see you again on October 24!

Until we can reconvene, take good care,
Alvin & Wendy

HERE COMES JOHNNY YEN AGAIN (or How I Kicked Punk)

Direction and Dramaturgy by Wendy Wasdahl

A solo acoustic punk rock raconteur work, Alvin Eng’s ‘HERE COMES JOHNNY YEN AGAIN (or How I Kicked Punk)’ explores the impact of opium on the Chinese Diaspora as well as NYC’s punk/counterculture through the dual prisms of William S. Burroughs’ character, “Johnny Yen”––immortalized in Iggy Pop and David Bowie’s ”Lust For Life”––and Eng’s own Grandfather’s opium overdose on the streets of NYC’s Chinatown.

Otterbein University Department of Theatre & Dance will present a staged reading and host workshops around THREE TREES, a play that explores the complex relationship between philosopher Isaku Yanaihara and sculptor Alberto Giacometti. THREE TREES is the first work of Alvin Eng’s Portrait Plays, a cycle of historical dramas that examines the parallels between portraiture, history and power as manifested in the convergence of different disciplines, eras and cultures. This play was presented Off-Broadway with the Pan Asian Repertory Theatre in NYC, as well as in staged readings with Baltimore Center Stage and The Moving Parts Theatre in Paris. https://www.otterbein.edu/theatre-performances/

THE MOURNING AFTER: A Play Reading and Discussion

On the Eve of the 18th Anniversary of 9/11, the BMCC Theatre Department presents The Mourning After, a one-act play written and directed by Professor Alvin Eng featuring Dominick Allen and Simone Zalusky. After the play reading, there will be a discussion and open mic: 9/11 themed poems and reflections of 2–3 minutes in length are welcomed!
The Mourning After was written on 9/11/03 aboard the A train as part of the “A Train Plays” 24-hour play festival. The play explores the then two-year aftermath of 9/11 through the prisms of class and perception as two strangers meet aboard a Queens-bound A-train. How far have we come as a country since then? Where do we need to go from here? RSVP to Facebook Event Page

THE LAST EMPEROR of FLUSHING: Our Laundry, Our Town, a memoir travelogue through Chinese America. The story begins growing up in a 1970s Chinese Hand Laundry in what was then one of the few immigrant Asian families in Flushing, Queens, to performing his one-man show, “The Last Emperor of Flushing,” in English in a former People’s Hall of the Cultural Revolution in his family’s ancestral Guangdong province.